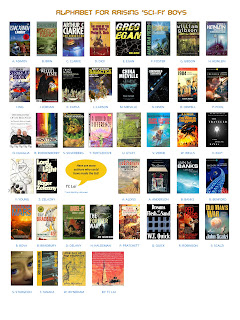 I did this on a whim after reading that funny updated version of  'Alphabet for Today's Kids' (where 'S' stands for Skype, 'T' for tablet, etc, but 'A' still standing for 'Apple' (iPhone, i.e.) :-).

So I decided to do one for sci-fi and fantasy reading and share the results with my member group: sfas@googlegroups.com, formerly the Science Fiction Association of Singapore.

(You can send comments to me at: buckrogers2011@gmail.com. To see the jpeg at a higher resolution, first click on the image and then select "Show original" at bottom left. This will allow you to zoom in. Strangely, it is not in as high a resolution as the original.)

The task of populating an A - Z list of sci-fi writers is not difficult, but there are challenges. For example, who should you include? Do you favour the writers from the Golden Age of Sci-Fi, or should you highlight instead the more popular authors? How about sci-fi from popular movies? Should novelisations be considered an original book? Also, some popular authors tended to write more short stories than novels. My guideline is that it does not matter. As long as a book (or a series of books) is well received, they deserve a mention. One problem is including new authors who have gained a fan following. My own guideline is that any author who has been in the profession for less than 10 years is 'new'. I also measure their output. Of course, you need not write many books to be exceptionally good. In any case, there is an 'Alphabet For Raising New Sci-Fi Kids' in the works. Those (including fantasy/genre authors) not highlighted in this issue will be featured on that list or other pertinent ones.

Why 'Sci-fi for Boys'? Well, male sci-fi authors seem to be better known. Besides Le Guin, there are many other sci-fi lady authors of note. They can be found in 'Alphabet for Raising 'Sci-fi' Girls'. I am not doing this because I am gender biased; just that female sci-fi writers should be celebrated just as much as their male counterparts. They are certainly on par in terms of imagination, writing skill and ability to awe. But boys are boys and girls are girls. Girls should have a list of female sci-fi authors they can look up to and be inspired by too, not just with those who write romance or vampire novels. Of course, they can combine romance with fantasy like what Sharon Shinn does.

Note: To view the charts clearer, right click over them and choose "Open link in new window." That will allow you to zoom in as well.
Posted by TC Lai at 23:39