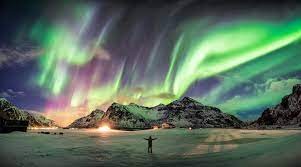 When Poh, my chaser friend (see other story) learned that I was going to Finland, he got upset. "Why the hell you want to go there?" His strong reaction was quite different from the other folks who mostly went: "The Au..aulola Bohralis, is it? Nice. And oh, have you been there?" No.

"Of course they deny lah," said Poh. "People can go mad  experiencing that. And who wants to recall those tragic moments?"

Go mad? Tragic moments? What the hell is Poh on about???

"Many people don't know what the... ohlorlah bolis can do to them until they get there. It looks nice in the photos, but the mysterious nature of the thing should be a warning sign."

I agree. The bohlorlah...ok, AB... is damn mysterious. Its diaphanous nature lending an air of impermanence and other-worldliness to the phenom. I almost always expect a spaceship to time-jump out of it.

Why, I asked Poh, do people go mad under the thing.

"Because it reminds you of all the souls you have had in your past-lives, including this one. Especially the unpleasant moments of it."

"Don't ask me why. It's like asking me why you today stepped on dog shit." Poh winced and pointed at my offending shoe.

I then excused myself to the grass patch outside the kopitiam and returned with a somewhat cleaned but scuffed shoe. Nabeh to the neighbourhood dog owners who don't pick up after their canine pets. CB, really.

"Ok, now tell me. Why do people go mad again with that AB thing?" I said, after settling myself down and having a sip of my teh-c orleng (siew dai, gau, c jiok).

"Think about it. Do you really want to visit your past lives?" Poh intoned, flashing an eye to a new kpt auntie who is actually a young Thai hired to clear the tables. She's pretty in an unadorned way.

"Well...." I tried to say. If I was a movie star in a previous life, why not? Then I remembered that quite a few HK actresses took their lives in the 60s. Famous ones even, and all were female.

"Wait, does that mean I will recall my female past lives as well?"

"Abuten?" Poh said, sounding incredulous that I would ask such a stupid question.

"But why would I be a woman!" I said or rather blurted out, my man-ego rather hurt. I couldn't imagine being a woman in a past life. I love having a d*** too much. I could never visit a KTV lounge without one and get a rise out of it. Covid virus not withstanding.

"Eh, why you so chaboh about it," Poh answered, adding salt to an already opened wound. "Didn't you once said you enjoyed sewing and ironing? Or throwing your haversacks and old stuff toys into the washer? Eh, aren't those very chaboh activities?"

"Oy, ironing is very therapeutic... and zen, ok? Ironing clothes is the best time to clear one's mind and think," I said, rather defensively. "And sewing... I told you once before, we - both boys and girls, had to learn in primary school. Cannot siam. Not only sewing but knitting, crocheting and even embroidery as well. Don't ask why the curriculum was such back then. But it was damn useful, especially when later when we did NS.  We could mend buttons, make attachments and so on." I was about to list off the many advantages of being able to sew when Poh cut me off.

"TC, don't go. It won't be pleasant even if you are one strong-minded SOAGun."

I seldom saw Poh so serious before. His caution made me pause.

"Have you met people who had returned mad before?"

"Only two kinds return. One, those who have returned and deny  ever seeing anything, even the AB. This is quite normal. Not everyone who goes there get to see those sky lights. A lot depends on timing and luck. Second, there are those who "disappear" go mad for about six months or so. They always claim they went backpacking or some excuse like that. Usually they are very evasive about where they've been. And guess what? They carry a sad look in their eyes for the rest of their lives."

"Poh, are you making all this up?" I looked at Poh and tried to discern a prank.

"Wtf TC. Have I ever fucked around with such matters?"\

I almost felt sheepish to have doubted this good friend.

Poh continued. "Look, we all hope to die peacefully or in our sleep. But that is rarely the case. What if you have had a traumatic death? Crushed like a tin can on the highway and leaking blood before you die half an hour later. Or being burned alive by some racist mob? Or worse, being experimented on by, say, a unit like the Japanese 731 in Manchuria. Do you want to relieve that? Or worse, relive somebody else's horrible death."

"I dunno. I only heard about it on the grapevine. Either ways, why chance it?"

Then Poh reached out for my hand. He studied my palm and declared, "Look, you have had an an eventful life up till now. See these marks, they indicate a mixed bag of stuff from your past lives."

Wait a minute! Is Poh telling me my palm could see into the future, present and even the past??? What the....

"And you think I was a woman in my past life?" I was still buay song..

"Definitely," Poh said. "Isn't that why you enjoy the company of women much better than guys? I believe you were not just a woman. You were a dike as well. Your breath stinks!"