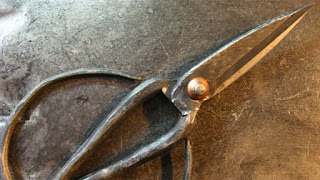 When I was an assistant to a Taoist priest, one of the things I hated holding was a pair of scissors. The one in question was a very old pair and as you can imagine it has gone through a lot. It is one of those short Chinese ones with the vinyl wraps at the oval-shaped handles. In the past, it was all the hawkers in Sg would use, from cutting g cheong fun to big/small intestines in kway chap. When my sister got married, she was given a pair. It's tradition, my eldest sister said, laughing before adding: In case your new hubby gets too rough with you on wedding night, you can cut off his GGJ. Oh, said my wide eyed innocent sister, examining the scissors like the CSI intern she was looking for blood stains.

Granted, the scissors is not often seen as part of the Taoist priest's Dharma set, but there are also other implements unknown to outsiders not in the trade. A bell, a roll of string, an inking pad, are some examples. And a colander. Yes, a colander. Although this has more to do with keeping burning joss paper from being lifted away by swirly winds than sieving out undesirable karma (haha).

You use what is convenient... Or is simply necessary.

And it is not just symbolic. The scissor is a great metaphor for severing ties, but it is also a tool for divining. We often threw the scissors at a half log to see if it would stick. One blade, or both blades. Each portends a different outcome. The log is painted red its rounded underside written with runes from an ancient time. Divining runes that are not too dissimilar from those used by fortune-tellers in Chinatown in days of yore. Only certain temples in Sg issued them. Best is to get one handed down. One that works, of course.

When I hold this log, the first sensation is that of cussing; then pain. "WTF!" it'd seem to mouth off. I get it: I would be aggrieved too if I get "stabbed" each time some dimwit wanted his fortune or future told. It is said this half-log had to be harvested from a special tree and a special place. Its wood was not so soft as to splinter easily and not too hard as to deflect the impaling bi-leg. On most days, it is cool to the touch. One day, I asked my sifu where he got it from. His answer was merely two words: My sifu. Nabeh, who donch know, I whispered under my breath. But my sifu he did elaborate further afterwards. This is what he told me: "In China, there are many old villages as well as old tales. Old villages that have been blessed with their own deities. How so, you may ask? Well, in their long history, folks who have hailed from their very village and done great deeds are usually revered and honored. Even well-respected emperors who had rested at a certain spot could be turned into a deity worthy of being worshipped and sought blessings from. In fact there is this ancient tea-shop location in China where an emperor had rested during one of his hunting trips. He had sat under a nearby tree and it had become a a place for pilgrimage for centuries, even till today...."

I was mesmerized when I heard my sifu tell this. It reminded me of Guan Yu, that general-deity regarded by many to stand for values such as honor, loyalty, and bravery. And a long-handled blade that could cut heads off with an easy Nike-swoosh. Be wary if your boss has one in his office. Heads will roll.

My sifu had chosen me as his assistant because he had held my hand and saw things. Usually it is the other way around. I would hold things and see stuff. Or feel them. It depends, on the material and its age and the circumstance. Plastic, I dislike even if they could last many lifetimes. It is a material with no soul. No past, ever present, and an annoying future.

The other thing I hated holding was a parking ticket. More than a parking violation it spoke much of mischief, disregard and just plain meanness. The last piece of paper on a toilet roll has more empathy and contrition.

So yes, a pair of scissors is in our ritual arsenal. It is often used to sever ties between a stillborn and its intended family, else this kind of grief lingers on and can affect future familial joy. Never leave such a devastating event unresolved for long. Just don't.

After such a ritual ceremony, I would refuse to touch the scissors and let my sifu handle. He seemed to have some kind of immunity to such influence. He could turn this ability on and off. I guess that's why he's the sifu and I the tudi. That is, until he bought me a pair of rubber gloves peppered with talcum powder inside. These gave off a pleasant feeling but left me looking like a plumber's assistant rather than a Taoist one. Nabeh.

As I got older, the "feeling-ness" of my touch has waned. I touch a fork and spoon and see only hygiene issues, not the happy face of someone gloating over food. This is especially so at the kopitiam near my place. Even if the fork and spoon is clean it is left with an invisible film of detergent. Don't believe me, next time you use a pair of utensils, wash them under tap beforehand. The casual way in which PFCs get into our food is alarming.

Although my extrasensory sense has waned, the memories have not. There was this unforgettable case of an incessantly crying baby who simply refused any kind of pacification - its wah-wah-wah cries fraying the nerves of Ah Mah and neighbors for days on end. It turned out that a pair of Chinese scissors the father had bought at a nostalgia flea market was a piece of nasty history and that he had left it "open" in the drawer. Leaving a pair of scissors open is never a good thing. By themselves, scissors are menacing items. Leaving them open is just screaming for it to invite fierce and unsettled spirits in or bring out its past sad history cut through epochs of its long existence. And believe me, a pair of Chinese scissors can last a long, long time, often beaten into existence by hand in a village somewhere. A village more often than not blessed with a sordid history than one saintly. So, be very careful what you leave open in a drawer.